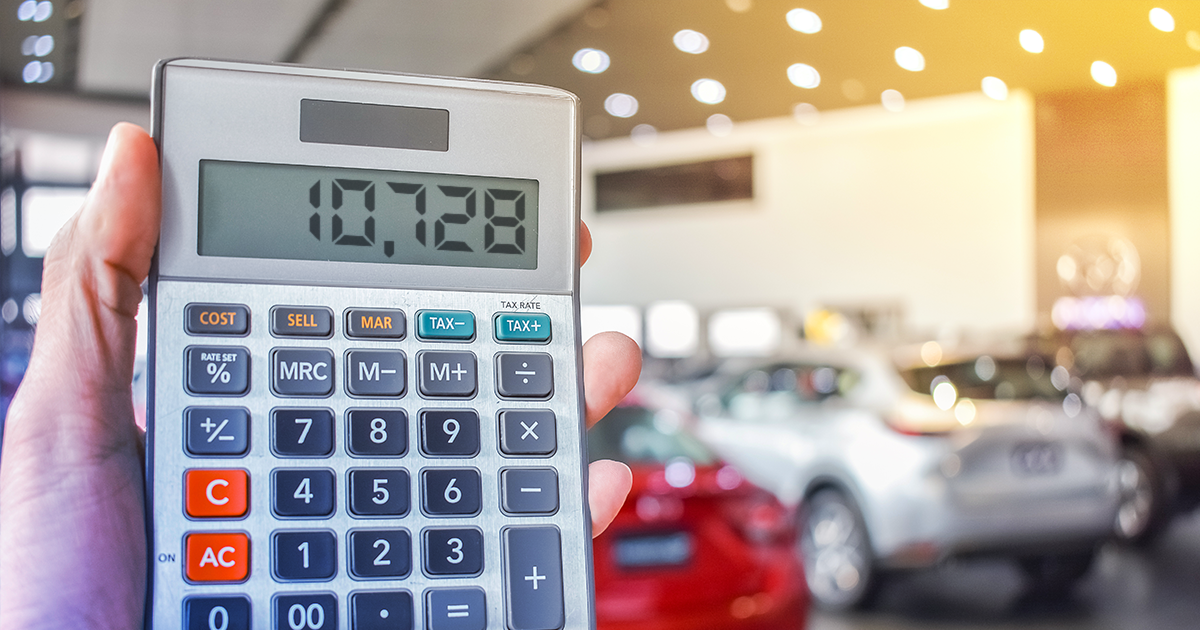 This year’s AAA Your Driving Costs study shows that the least expensive vehicles are small sedans at $8,184 per year and electric vehicles at $9,048 per year. The two most expensive categories are half-ton pick-ups at $12,932 per year and medium SUVs at $11,305 per year.

The overall average MSRP of all vehicles studied is $33,301. (AAA does not cover sports cars, luxury cars, or high-end models in the Your Driving Costs study.)

Find details of the study in the fact sheet. AAA has been providing information on the average costs of owning and operating a new vehicle every year since 1950.

New this year, AAA launched an online Your Driving Costs calculator. This interactive tool lets you determine the ownership costs of a vehicle. You customize the results by your location and driving habits. Data is available for new and used vehicles going five years back.

Find the complete breakdown of costs per vehicle here.

For this year’s study, fuel costs were projected based on a weighted average of the first five months of 2022. During that time, fuel prices nationwide averaged 17.99 cents per mile or $3.999 per gallon. In Oregon, drivers paid roughly 19.79 cents per mile or $4.41 a gallon. Pump prices have seen a dramatic climb since February, and, as a result, the cost of vehicle ownership has increased accordingly since the Your Driving Costs evaluation was completed.

“Buying a vehicle is one of the biggest purchases that many of us will make during our lives. Most new car buyers think about the purchase price and the monthly payment. But the expense of owning a vehicle also includes fuel, maintenance, insurance, registration, finance charges, and depreciation,” says Marie Dodds, public affairs director for AAA Oregon/Idaho. “Depreciation catches many consumers by surprise. The old saying goes that a new car loses value when you drive it off the lot, and the AAA Your Driving Costs study confirms that’s true.”

Depreciation is the difference between the vehicle purchase price and the estimated trade-in value. The depreciation values used in the study are projections based on past trade-in and sales data for similar vehicles.

The costs for each of these categories as listed below are an average calculated over five years and 75,000 miles. 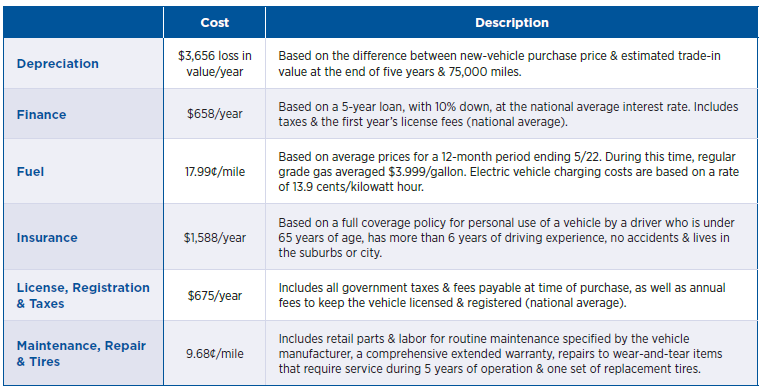 Here are other highlights from this year’s AAA Your Driving Costs study:

Electric vehicles: (such as the Ford Mustang Mach-E, Nissan Leaf and Tesla Model 3.) Beyond fuel savings, electric vehicles have the lowest maintenance, repair, and tire costs. This is because gas-powered vehicles require additional maintenance such as oil changes, air filter replacements and inspection of mechanical components not present in electric vehicles. Additionally, EVs have the lowest fees due to federal and state tax rebates and/or incentives offered to buyers of new and sometimes used EVs as a purchase incentive. Overall, EVs have the second lowest driving costs of any vehicle category.

Small sedans: (such as the Honda Civic, Hyundai Elantra and Toyota Corolla.) These are often a first car for many buyers. They have the lowest annual fuel and maintenance costs, including the lowest depreciation cost of any vehicle category.

Medium sedans: (such as the Honda Accord, Hyundai Sonata and Toyota Camry.) They used to be the go-to car for many buyers but are now less popular than compact and medium SUVs. The average driving costs of medium sedans rank fourth highest; however, they rank worst in both insurance and maintenance costs.

Subcompact SUVs: (such as the Honda HR-V, Jeep Compass and Subaru Crosstrek.) They have the sixth lowest fuel costs and fifth lowest maintenance costs. They are third lowest in fees and depreciation and second in insurance and financing costs. Overall, they have the third lowest total cost of ownership behind small sedans and EVs.

Compact SUVs: (such as the Ford Escape, Nissan Rogue and Toyota RAV4.) These are very popular. They have the lowest insurance costs of any of the vehicle categories, and third lowest in depreciation and finance costs. Overall, they have the fourth lowest average driving cost of any vehicle type.

Medium SUVs: (such as the Chevrolet Traverse, Ford Explorer and Toyota Highlander.) These are popular for larger families and others who transport people and cargo. They rank near the bottom in many categories. They are third highest in fuel, finance, and depreciation costs, and second highest in fees and maintenance costs. However, they rank third lowest in insurance costs, likely due to vehicle safety ratings.

Midsize Pickups: (such as the Chevrolet Colorado, Ford Ranger and Toyota Tacoma.) These don’t have the capabilities of larger pickups but can haul, tow, and go off-road. They rank near the middle to bottom of most cost categories. They rank second highest in fuel costs, third in fees, and fourth in maintenance and finance costs. They are fourth lowest in insurance and second lowest in depreciation. Overall, midsize pickups have the third-highest average driving costs of any vehicle type.

Half-ton Pickups: (such as the Chevrolet Silverado, Ford F-150 and Ram 1500.) Given their size, fuel economy and prices, it’s no surprise that pickups have the highest average annual driving cost among the vehicle categories. They have the highest fuel and financing costs. They are second highest in depreciation and insurance costs, and fourth highest in maintenance and repair costs.

Hybrids: (such as the Honda CR-V, Hyundai Ioniq and Toyota Prius Liftback.) Larger hybrids have become more popular in recent years, increasing costs. They are still second lowest in fuel costs, only behind EVs. They’re third lowest in maintenance costs, and rank near the middle in depreciation and financing costs. However, they are third highest in insurance costs. Overall, hybrids have the fifth highest overall costs. 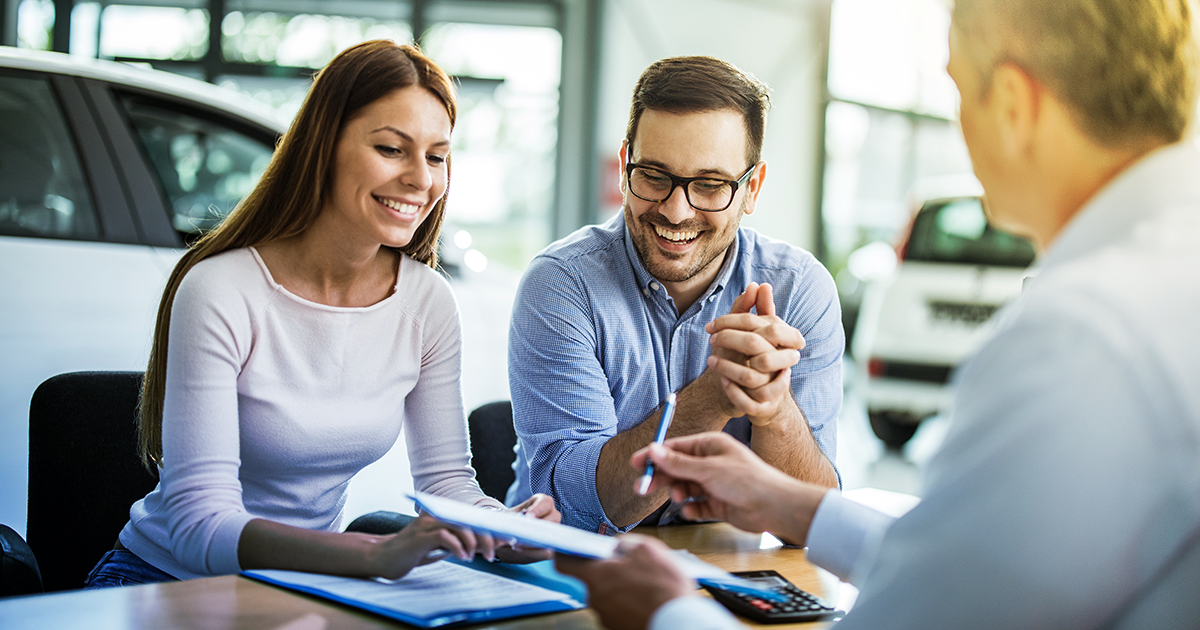